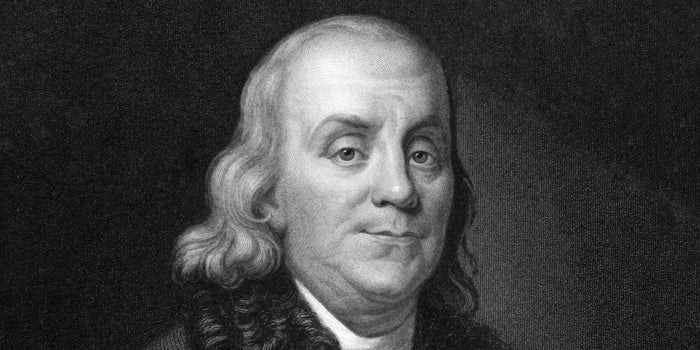 “As I’ve learned from Ben Franklin, core values are vital to capture lightning in a bottle. Establish them early, and practice them often. Be like Ben. Create your own legend.”

Franklin was … an extraordinary business and civic leader. He knew how to delegate, he knew how to network and he knew how to raise capital. He ran his own printing shop, then franchised his business to ward off the threat of local competition. He bought and then grew The Pennsylvania Gazette into one of America’s most prominent newspapers.

So, when it came time to write down my mobile esports company’s values, I looked to Franklin’s 13 Virtues as inspiration.

The system Franklin devised (at the age of 20!) to develop his character doesn’t seamlessly translate to today’s world. Yet, with a thoughtful update, the core of Franklin’s ideas provide a powerful blueprint for building a successful gaming company — or any kind of initiative.

Here’s how we’ve adapted and adopted some of Franklin’s values at my company, Skillz.

I don’t care if you’re a hotshot engineer or the most incredible marketer on the planet — we have a strict “no jerks allowed” policy. Being a jerk ruins cultures, and bad cultures ruin companies.

As part of our commitment to honor, we ensure fairness in our games — which means stamping out cheating before it starts. We rate players accurately so that they’re matched against others with equal skill. We dive into data to pinpoint aberrations and magical increases of skill that could indicate cheating attempts, and can even discover if players are cheating by how they swipe or hold a device.

In general, entrepreneurs and leaders should conduct themselves at work and at play as if everything they do will appear on the front page of The New York Times. In a world with omnipresent social media, those types of ramifications are more likely than ever.

It’s our mission to make every competitive experience as exciting as Game 7 of the World Series, bottom of the ninth, tie score — and we inject that mission into all we do internally. We frequently test drive our own games with internal staff tournaments that boast prizes like Skillz swag but, above all, bragging rights. Also, all Skillz employees are required to play 35 games per week to ensure we’re all assisting in testing out the latest and greatest content to optimize the experience for our 18 million players.

Live your mission, and you’ll be far more likely to achieve it. If you’re starting a new company, make sure your product or service is something you’re passionate about. Just because you see an opportunity doesn’t mean you’re automatically going to be successful. There are a lot of great ideas out there, but you have to genuinely enjoy the time you spend at work to overcome all the challenges associated with building a thriving business. At Skillz, we hire people who are passionate about making gaming better and challenging the status quo. As you look to build your team, hire people who share your vision.

“I am a strong believer in luck and I find the harder I work the more I have of it,” Franklin famously quipped. We’re of the same mindset: We work hard to make incredible advances. As a result, we’ve been lucky enough to be named the fastest-growing company in America.

That said, while I slept at my desk several times at previous jobs in venture capital and private equity investing, those habits have been put to bed at Skillz. Why? I’ve finally learned that balance can make all the difference.

As a leader, you should vigorously enforce a work-life balance. There may not be enough time in a normal workday to accomplish everything you want to get done at a startup, but you risk losing staff if your team burns out quickly from working too many hours. Skillz has an official “weekend whistle” at 5 p.m. on Fridays, and we enforce an email embargo until noon on Sunday. That ensures an uninterrupted 43 hours offline, which is a lot for startups! We also offer half-day “summer Fridays” in August and a generous PTO policy — our staff takes an average of 21 days off per year.

Ben Franklin didn’t have a set schedule, and he was one of the most productive people in history. In similar fashion, we don’t schedule high school-style chunks of time all day. Instead, we trust our team to figure out a way to ace the test. It’s about results, not work.

Another way to think of this is to treat everybody in your workforce as if they’re CEOs. This isn’t high school; we’re all professionals. Entrepreneurs need to empower their teams and provide opportunities for ownership and autonomy so people can do their best work. This can be done by looking for ways to help employees grow and develop new skills, whether that’s having the chance to run point on an important project or stepping into a different position.

Collaboration in all things

Franklin is known as an iconoclastic larger-than-life individual, but a closer look reveals almost every initiative of his was a team effort, from declaring independence from Britain to capturing electricity (more on that below). We embody that spirit of teamwork as we work in diverse teams across a fast-growing organization, and also when partnering with more than 13,000 game studios around the world. In an increasingly hyperconnected world, that collaborative spirit is more essential now than ever.

Frugality: Not cheap, but smart

In the modern era of enormous funding rounds, it’s easy to slip into inefficiency. Given this omnipresent reality, we ask all of our employees to establish healthy financial habits for long-term success. (Franklin admitted difficulty in living up to this value and credited his wife, Deborah Read, in helping him stay the course. Another example of collaboration!)

Make sure your employees manage company money as if it’s their own. CEOs should set clear guidelines and empower managers to spend funds that will have the greatest ROI for the company and move the business closer to achieving its goals.

Capturing lightning in a bottle

Many know the story of Ben Franklin and his “discovery” of electricity with a kite and a key. This example embodies many of his values: years of work, collaboration with friends and family (his son held the kite), frugality (it was just a kite, a key and a Leyden jar), and a clear mission to demystify electricity. The results are stuff of legend.