Let it not be true.

I woke up today thinking I might be sick. My throat was sore and I felt like complete crap. I really hope this is a one day thing that will go away by night end.

Not feeling my best I left the house early at 8:30am. The best plan now that school is in session is to beat traffic as much as possible. Surprisingly for a Monday the highway was not bad. I Even had time to stop at Advanced Auto Parts for two quarts of engine oil. I have a leak and with all of the driving I do it was bone dry. The question is, for how long?

It felt good to be ahead.

Even with my random stop I made it 20 minutes early to the café. I do not think I have been this early since we first opened up. I must have gotten too comfortable making it on time and uncomfortable with waking up early.

With the extra time I had I made sure all my prepping was done with swiftness. That included setting my food to cook, making sure the rice making was going, cutting what I needed for the day and then cleaning up for open. With all of that out of the way I had plenty of time to grab myself a Moku Bowl for breakfast with the usual additions and toppings.

This day of the week could be better.

Being a Monday, business does not usually kick in until noon or later so it gave me the opportunity to work on my blog post for tomorrow. Entirely engaged with my work it came to a point where I had to stop. I was kicked off of the Market’s wireless network not being able to do a thing with my laptop. The need for Wi-Fi was real.

It started to rain around 2pm and after that nothing happened. Being on my feet for so long throughout the day with no activity made me very uncomfortable. My body was achy from possibly being sick that I could not find a proper way to stand. I even tried sitting but that last a mere 5 minutes. No matter what I did the feeling was the same.

While the connection was out I came up with new designs. I sketched them out as best as possible with the pen I had in my back pocket. I had a mechanical pencil in my bag but for some reason it was empty and I never noticed. Lately I have seriously been contemplating on getting an iPad Pro. After today I might make an official attempt on researching it.

It was time to pack up around 5pm. Earlier than normal. The rain would not let up and being at the café was pointless. Even the lady I work with told me to get out as soon as possible. The possible never came early. I decided to do a deep clean of the place. Even hand washed the towels in bleach to try and bring back their vibrant white. I did not leave until 6:30pm. It was later than I had hoped but I was in no rush to leave. My body was not moving fast anyway.

Throughout my cleaning process only one person came in to make a purchase. One person in 3 and a half hours of me doing nothing but drawing and cleaning. It really was a slow day. 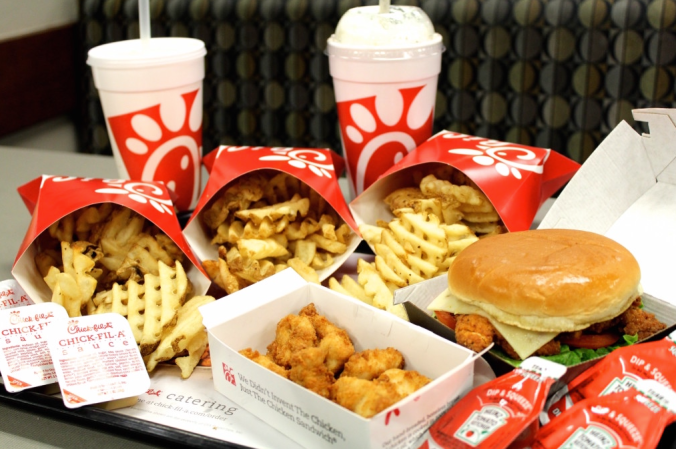 On the way home, I treated myself to Chick-fil-A for the outstanding job I did. In the drive-thru I ordered a spicy deluxe sandwich with a side of waffle fries and an 8 piece nugget box. To wash it down a strawberry milkshake.

Driving on a full tank.

Ate as I drove but never finished the nuggets. Could not fit it. Normal I can eat it all without even trying. Today I was full from the sandwich alone. Did not even finish the shake which is the main reason for me even going there. I had to put the rest of it in the fridge when I got home.

With my stomach ready to explode I played with the nephew for a bit until I had to get to business. My buddy from Texas and I jumped on a Skype chat to get things rolling with the logo. After tinkering with it in Adobe Illustrator we decided to have it done on Fiverr. We were both under the weather and could not deal with it. We did learn a lot about the program. It was the biggest upside to our screen sharing chat. We now know how to make straight lines and shapes. I thought it was helpful especially for future designs.

Around 11:30pm we were finished. It was time for some well needed rest.