Back to the usual.

It has been a while since I had to wake up at 7:30am to move my car. Being at someone else’s house or away in another state has spoiled me. I was a bit upset when I walked outside to have my eyes being burnt out of their sockets. The moment I got back in, it was right to bed for a 30 minute nap. 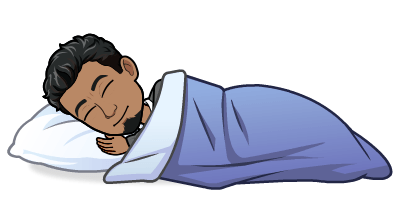 Bitmoji version of Me

Officially awake I got dressed for work and had myself a bowl of cereal for breakfast. If there is one thing I miss about the hotel, or the endless places to eat around it, is the variety of food to choose from that I do not have to cook myself. Maybe when I start to live the ‘good life’ I will hire a cook once a week and call it ‘Chefs Day.’ Sounds pretty good.

I was out of the house by 9:15 leaving myself with plenty of drive time. Time that I did not need because the highway was clear.  I even got there 15 minutes early. The lady I work with and I were meeting at a Verizon headquarters to service all of those hard-working individuals who keep my internet snappy and phone calls clear. The moment she pulled in, I got right to it. I prepared as much as possible before we decided to open up.

From 11 – 2pm we did pretty good business. Not as much as previous times but it was close enough for today. For two of those hours we were swamped with people who all wanted the same thing. It was hard to keep up at one point but we managed to jump on the flow of things, moving the line as quick as the orders would let us. I was able to control the line by taking small breaks in between every two customers or so. Thanks to the intentional delay things worked out.

The moment our window cleared out we ate. We had food sitting on the counter from another vendor that was just calling our names. Two delicious chicken parmesan sandwiches. These sandwiches are what get me excited to be there. I know at the end of the shift there is one waiting for me to enjoy. It has to be the best chicken parm on this planet. Thank you being in my life Tony’s Traveling Trattoria!

After filling up our stomachs we packed up and headed off. I was home by 4pm and relaxing in the showering as the water massaged my body.

End of the night.

Around 8:30 my girlfriend came over for some quality time. She had a long day at work and was hungry. The feeling was mutual. So, we went out to Chick-fil-A for a really late dinner. But we went through the drive-thru which made eating it even later. By the time we got back to my house it was past 9:30pm. Being as hungry as I was, after eating my chicken sandwich, nuggets and fries I ended up finishing hers because she got full. Where do I out it all, I have no clue.

While eating I started to watch a Disney movie called “Coco.” I was a bit skeptical about it but was wrong. While digesting my girlfriend ended up falling asleep so I ended up watching it by myself. The movie was amazing. A lot better than what I expected it to be. With the first 10 minutes of the movie it had me laughing. Great way to end the night.