Today was the big day. Test day. The moment I have somewhat prepared for.

My girlfriend was up by 6:30am getting herself ready to head out. Her and her sister had a busy day of errands that began with the laundromat. I fully awoke around 9:30 to run my own errands. After getting dressed I headed out. I needed to stop by my house to pick up money that I had put aside to deposit. I have had it sitting in my drawer for about a week because of my laziness to make a bank trip. Unfortunately, I had no choice today since my account had hit 0 without me knowing it. The struggle of no direct deposit.

After the bank I had about 2 hours before my test. To use that time wisely I stopped at a Panera Bread that was about 7 minutes away from the testing center. With my ordered placed I found myself and wide table and made camp. I set my iPad up with their WiFi, laid out my study workbook and opened up my notebook so I could jot things down. I wanted to cram as much in as I could.

After sitting there for 45 minutes someone finally came out to greet me. I received my superfruit smoothie but no cinnamon swirl and raisin bagel. I was confused but also in the middle of my studies so I let it be. After waiting another 15 minutes someone else finally came back over to deliver my entire meal, including another smoothie. Apparently, word never made it to the staff that only half my order was brought out. Since there was a lack of communication I made off with a complimentary drink. Thank you, guy!

Around 11:45am I packed up and walked out of the door back into the 98 degree weather with no cloud cover for shade. The sun was beaming. Before leaving the shopping center I drove over to a Hallmark that was down at the other end. I wanted to check out their inventory in case I saw something unique or special. I need a 12 year anniversary gift and have no idea what to get. The selection there was not worthy for a gift but I did get a lovely card. They never fail with the cards.

Officially on my way to the testing center I was nervous. I pulled into the parking lot around noon with a stomachache that lead me straight me to the bathroom. My nerves were going crazy. Normally I do not feel this way so it was odd. Finally, at the front desk I signed in, put my belongings in the locker and was immediately taken into the testing room. While getting set up I had a wonderful conversation with the agent. She has her lined down to the ‘T’. Almost as if it were recorded. It was very impressive.

The test took me about 2 and a half hours to complete. I bombed it. Completely. There was no hope for the amount of studying I put in to successfully ace it. For future reference I will have to study 10x as hard.

Fill in the pain.

By 2:30pm I was sitting in my car talking the love about how disappointed I was in myself. I expected nothing more but it still hurt. I wanted to get a way better score than what I got. To make up for it we decided to take a trip to the mall. I have been looking for a new blazer and have yet to find one that I like. Within 30 minutes I was at her doorstep waiting in the heat under a tree for her to come down. The air conditioning is busted in my car so we jumped in hers very quickly.

At the mall we came up with a game plan to spend to no more than 2 hours walking around. We were both on a time restraint and be very wary of getting out promptly. Since the only thing I had to eat was a bagel, our first stop was the food court. I must have jumped in and out of several lines until one actually moved quick. I do not know what was going on but everyone was packed and slow. Finally getting my food from Kelly’s Cajun Grill we share the plate to our stomachs content. It was a delicious mix of Bourbon chicken, spicy chicken vegetable rice, sweet corn and sweet plantains. Yum!

Our next stop was at the Express Outlet for men. I remember getting a blazer from this store that was very unique and became my all-time favorite. I went in with the same attitude expecting to find something just great. I ended up seeing my favorite jacket that I bought last year but nothing else stood out. The inventory they had was not for me. Right next to Express was a Famous Footwear that my girlfriend and I like to buy shoes from. For me nothing interesting today but for her, oh boy. She left that store with two pairs of shoes for her sister, two pairs for herself, a discount of $10 and two free packs of socks. Talk about a win, WIN!

We left the mall a little after 5:15pm. I thought we would good on time but we got caught in traffic on the main road that we needed to take home. She was so short on time that she dropped me off a few blocks away the house so to make it easier on her trip. She had a nail appointment at 6pm that she was running late for. In the middle of the rush I ended up leaving my phone in her car. I did not notice it until I went to pull it out to play Pokémon GO! The walk was lonely but I bought a piña colada along the way which made life a lot better. 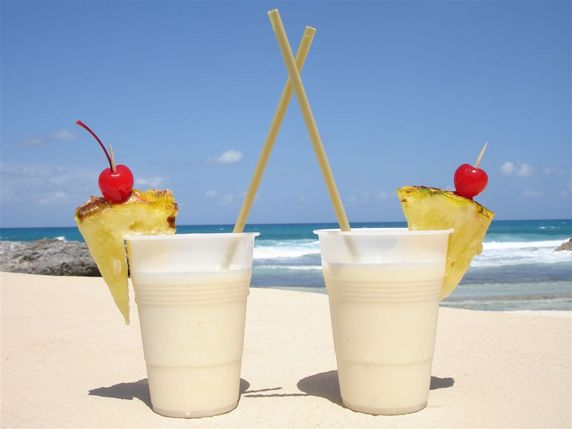 I left the house around 6:30 to head to the office. On the highway I got stuck next some guy who played hardball. He would not let me into his lane so I missed my exit and got slightly lost. All he had to do was slow down a little bit but noooo he was a jerk about it. Luckily, I had my iPad with me that has 4G connectivity, otherwise I would not have been able to find my way. With 5 minutes left on the clock I made a quick stop at Dunkin’ Donuts for coffee. I needed it. The ride there I was dozing off because of the slow traffic and heat combination. I made it to the office by 7:35, a little late but not too much.

Training was light today but good. It was not like our usual training but the office is working on changing things up so I did not mind it. After chatting with everyone I was one of the last bodies out of the building. Sometime our conversations get carried away and we lose track of the office hours. Good thing my RVP does not mind.

Back at her place by 10:30pm we showered up and headed downstairs for a snack. After walking bath and forth from the refrigerator and close I decided to have a bowl of cereal. At first, I felt guilty eating it because my just sat there sipping on seltzer water in hopes of it soothing her stomach. Not long after the first bite did that guilt go away. As we sat there we watched a DashieGames video together.

Her sister showed up with their cousin right as we were putting ourselves down. We were tired from our days ready to call it a night. Too bad I had to ruin that by going downstairs. My car was blocking the driveway and the car my girlfriend’s sister was driving needed to be put away for the week. They are leaving to Florida for the next 5 days on vacation. This was the last night sleeping in the same bed for a while. Their flight is at 6am, we need to leave at 4:30 the latest and after chatting for a bit, it is now 1:25am.