Today is the big day! I will be out from AM to late PM!

The worst part about waking up and knowing you have a long day is looking out the window as rain pours down. I woke up at 8:30 to the sound of it hitting my air conditioner. My original goal was to get up at 8 but last night I went to bed late so that did not happen. Either way I had more than enough time to get dressed and have the most important meal of the day, breakfast.

I left my house at 10:25. The GPS estimated that I would make it to my destination with a half hour but I do not think it included slow drivers due to rain. People were driving either too fast over the speed limit or way below it. I might have been the only one actually driving normal. People need to be safer.

Work, rain and no way out.

I arrived at a school where a fundraiser was taking place after the estimated time, 11:10. To be honest I was not in a hurry whatsoever. It was raining and I did not want to be in. But it was for a good cause and the organizer make it clear that cancelling was not an option. She wanted us there no matter what. It sounds good but not when the weather consists of a dark sky and clouds full of enough water to last hours. We would have definitely canceled.

For 4 hours we sat on our hands as the raindrops trickled down our window. They had more vendors, seven to be exact, than needed. There were more staff and students present than anything. Besides them there were EMTs, firemen and police. It was understandably vacant. The worst possible day to raise money for any occasion.

In between, since we had plenty of time, I stepped out for a bit. We were 5 minutes from Mitsuwa, the Asian market from Wednesday, so I left the lady I work with to go shopping. I did not go for any reason in particular, mainly snacks and our lunch. Like I said on Wednesday this place has amazing food. Today we went with rice balls from Omusubi Gonbei! Two salmon, one spicy tuna and one mentaiko (“spicy seasoned cod roe”). 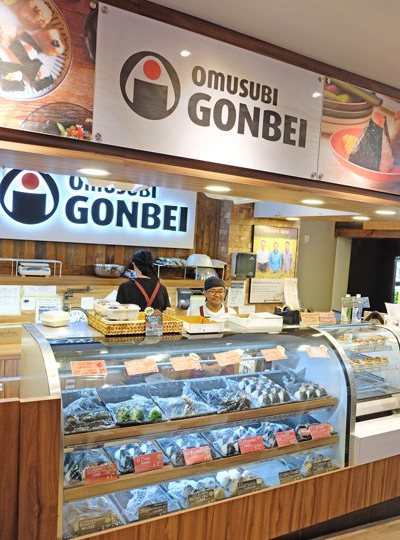 Time for a marriage.

Around 4:30pm we left the “fund raiser” and headed to our next gig. We were invited to serve at a wedding for a young couple taking the next step in their relationship. On the way there I ended up passing the entrance to the field club where the celebration was being held. I literally got lost right around the corner from the place but at the same was given the opportunity to view the real estate. The houses I saw were beautiful and unique. I have been to many different places but these houses were truly something. Perfect visual to aid in my dream home ideas. Envision it and it shall appear!

After finding my way we set up and were ready to go. The wedding was a success. She said ‘I do’, he said ‘I do’, and no one had cold feet. The best part of it all is that the rain stopped for their entire wedding. It is said that rain is good luck but I think that’s crap. Who wants a wet dress or wet suit, right? No matter, the newlyweds had a great time, their guest enjoyed the ceremony and the night ended in victory. Congrats!

As soon as we started to pack up, 9:30pm, the rain continued from earlier. I swear it help up just for that lovely couple. I hoped I would be home before it started again but my hopes were shot down. I knew it would rain again but luckily it was more like a misty drizzle and not a full on down pour.

I was home by and ready for bed at 12. Unfortunately, me being ready and actually going to bed were two different things. I had a small conversation with my mother to see how her day went, I was surprised to know she was awake. Then I stayed after that messing around with WordPress creating new categories and typing things up. I spent more time than expected but was finally in bed by 1am.

While we were there we had some great food. Barbeque brisket, glazed turkey and fantastic cornbread.