After a day like yesterday, I made no effort to wake up early.

Needless to say, I slept in until my body told me otherwise. I think at one point I tried to bribe myself to stay in bed. I have been extremely drained from the past couple of days but finally getting up at 11:30am felt good. I even locked myself up in the room to write. I did not even take a morning bathroom break. Sat up off the bed and then right into the chair in front of the desk.

From 12 – 4pm I cannot recall what happened. My mind went blank.

The family and I decided to order take out. None of us wanted to cook and my father was in the mood Burnet BBQ. I want to say it is like all of the other barbecue places but nothing can really compare. They use a giant charcoal grill to roast their chicken and ribs but it is the way they season the meat that makes them who they are. Halfway through roasting the chicken they squirt some kind of hot sauce on it. I guess with the heat the chicken skin just soaks it up. I have no idea how they do it but it is good. 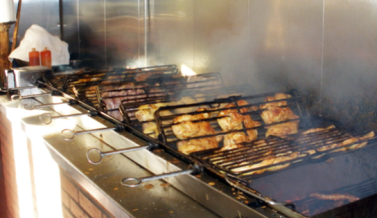 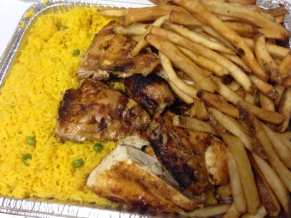 Unwillingly, I left to pick up the food around 4:30. They are usually quick but I needed to make a stop beforehand. I recently washed four quilts and a few sheets that I had set aside for the laundromat. After getting home with the clean goods I realized I had nowhere to put them. To fix that problem a tote was needed which is where my Target trip came from. Since I woke up but still felt asleep I bought 2 candy bars along with the tote on the way out. Sugar rush to get going.

Back home with the food but did not eat.

The quilts were really bothering me. The fact that they were still in the laundry bag annoyed me. As soon as I put my pajama shorts on, the room was slightly rearranged.

First step: Stuff the tote with as much as possible.

Second step: Find a place where I could not see it but could get to it easily.

Third step: Clean up after myself.

Pretty simple when I began but turned into a project mid-way through. Either way I was able to squeeze it under my bed with the handle semi out for when I need it. Nicely out of sight. Then I shuffled things here and shuffled thing there, vacuuming and dusting as I went, and voila! The place looked pretty good. Still need to do more but that was as far as I got.

While straightening up I had a movie starring Nicolas Cage playing in the background called “Looking Glass.” The movie and my interest to fix my best friends old computer is what turned me away from cleaning. After trying to turn it on several ways, I realized that power unit was busted. Granted it is about 7 or 8 years old, but it was the last thing I thought would cause a problem. It did not turn on for nothing. It just flickered for a millisecond.

Since it would not start I put it away. My best friend wanted to play a few games of Fortnite so around 6:30pm I stopped the movie and joined him. He wanted to stream and I wanted to play so it worked out. It was also my first time using Discord for voice chat. After a half an hour we figured out how to use it. From there on, the gaming was a blast. We had more kills today since the game came out.

Game time is over.

Around 8:45 my girlfriend comes over with a surprise for my mother and sister. Since it is my sister’s first Mother’s Day, my girlfriend bought an ice cream cake saying “Happy 1st Mother’s Day Jo.” It was a sweet gesture that we all appreciated. My girlfriend also bought a beautiful bouquet of flowers with two balloons.

The rest of the night ended in bed. While she slept I finished the movie from earlier – it was not worth the time, watched two episodes of “Blindspot“ and finally hit the pillow myself.

3 thoughts on “The Night Before Mother’s Day!”