I think I pushed myself too much!

I slept in today trying trying to get extra rest in the mornings. Still woke up with a sore throat but feeling much better compared to the last two days. I think a few more days and this cold will be over. Too provide myself with some energy I cooked pancakes for breakfast and drank a small mug of coffee. I burnt the bottoms of the pancakes a bit but they were way better than yesterday’s soggy waffle.

Before leaving the house I wanted to be somewhat productive. The washer is fully functional now so I washed clothes knocking down my pile to one more load. As I walked out the house I realized my activities were not complete. It had snowed. The front of the house looks clear but my driveway is packed with about 3 – 5 inches of snow. I was for certain that there was not enough snow to shovel but I was wrong. There was no possible way for me to get out without shoveling. Even though my body needed the rest being home on a beautiful day is a crime.

I left my house around 1:30pm on my way to pick up my girlfriend so we can have a late lunch. Shoveling and clearing off two cars took a while. We decided to be spontaneous and try a new taco place about three towns over called Tacoria. I had a spicy chicken quesadia that did not hit my spice level. Good thing they had four different sauses for me to try. they were not the greatest but definitly better than Taco Bell. All of the ingredients were fresh, meats cooked and flavored right at the grill and very clean cooking. Afterwards we stopped at Starbucks so I could get a matcha green tea latte. My go to!

Back at my girlfriends house and exhausted!

Not feeling too good I laid down on the couch just to closed my eyes and rest. It is Monday training at the office tonight but I won’t be making it. During my drive home I stop at Staples to get printer paper for my mother. I should have gone striaght home.

Walked through my door at 6:45pm and straight to bed. The entire drive home I was as cranky as my nephew when he does not get his bottle. Head beating like a drum and annoying people on the road. If only I could Bruce Almighty everyone.

Woke up at 8:30pm to make myself some tea. With my mug in my hands I sat in front of the computer to catch up with YouTube. My appetite for dinner was not strong so my meal was simple, two cheese filled Puerto Rican pastelitos.

The rest of the night, about 2 hours, I spent gaming with good friends. We played Fortnite until 12pm and then once again off to bed. 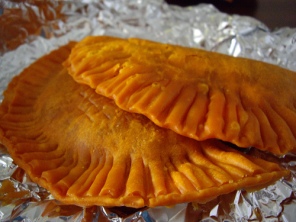 I did eat an orange for Vitamin C before bed.